HELDIN was founded by Margaux Van Puyvelde, a home brewer and bio-engineer from Opwijk with a passion for tasting and creating new and interesting beers. 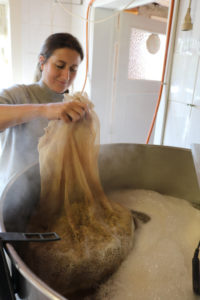 “Women have been active in brewing since ancient times. Though Western societies have viewed brewing as a male-dominated field for the last 150 years, traditionally, it was an activity engaged in by women. Ethnographic and archaeological studies have shown that brewing was an outcropping of gathering or baking traditions, which were predominantly women’s roles throughout the world. From the earliest evidence of brewing in 7000 BCE, until the commercialization of brewing during industrialization, women were the primary brewers on all inhabited continents. In many cultures, the deities, goddesses and protectors of brewers were female entities who were associated with fertility.

From the middle of the 18th century, many women were barred from participating in alcohol production and were relegated to roles as barmaids, pub operators, bottlers or secretaries for breweries. In less industrialized areas, they continued to produce homebrews and traditional alcoholic beverages. From the mid-20th century, women began working as chemists for brewing establishments. Beginning in the 1960s and 1970s, they began re-entering the field as craft brewers.”

A WORD FROM MARGAUX 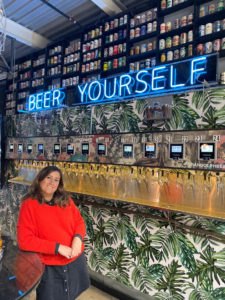 My appreciation for specialty beers started when I was a student in bioscience engineering at the KU Leuven. The city of Leuven has a long beer history and many of the local cafés are proud of their extensive beer lists. While on most nights out we would drink pilsner, during sunny afternoons on the old market square I would try different trappists, tripels or what happened to be “beer of the month”.

When the time came to select a major in my studies, I chose food and beverage technologies. This industry interested me because access to safe, nourishing (and tasty!) food will always be relevant to humanity. The fact that this major included a subject about malting & beer brewing made my decision that much easier.

For the exam of the beer course, we were asked to bring a beer to the exam to discuss with the professor. I took the opportunity to visit different breweries including lambic and geuze breweries. During an afternoon in a dark and damp tasting room, I developed a real taste for the sour complexity of lambic, geuze and other mixed fermentation styles.

After graduation I started dabbling with home brewing. The beer kits I started with in my kitchen didn’t leave room for much creativity, so I quickly started all-grain brewing and creating my own recipes. Thanks to some practice and the many available resources in literature and on the web, the quality of my brews improved over time.

Family and friends liked drinking my beers, so I decided to collect some further feedback. I hosted a tasting afternoon to get some comparative notes on my different beers. From this feedback I developed the recipe for the first commercial beer, Heldin – Flanders IPA.

In the future, I would like to start my own process scale brewery, however today I only have a homebrew pilot scale installation. That is why I teamed up with Brouwerij De Graal to produce my recipe for the time being. Heldin – Flanders IPA was launched end of 2019. Have you tried it? You can find our stockists under the ‘Find Us’ tab. Currently I am working on fine tuning the recipe for a second beer to launch in the future. Keep an eye out for news on this!